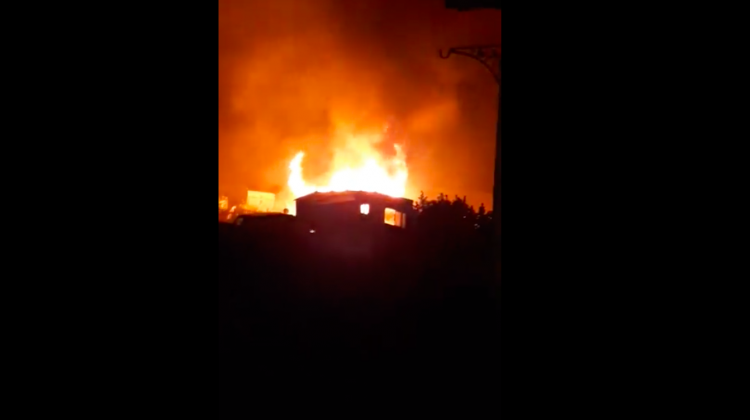 A unit in the village's trailer park was in flames on Saturday morning. Photo sourced from a video taken by a Port Alice resident.

PORT ALICE, B.C. – A man has lost his home following a fire on the North Island.

Early Saturday morning, Port Alice crews responded to a blaze in a unit at the local trailer court. Port Hardy’s fire department assisted in knocking down the flames.

The fire happened in unit 49 of the complex.

“We had a pretty bad wind storm and rain storm that night, too…I was talking to Tim McLean, who lived in the unit, and he said that after the power went out, that he had gotten up to do something and he noticed his ceiling was on fire,” said Jacqueline Garepy, a resident and manager at the trailer court.

“It was due to a fire wood stove. He (McLean) said him and a friend were there, and they managed to get out and the (trailer) was gutted. It’s a mess.”

Garepy said McLean is staying with a friend. The unit at the trailer park is beyond repair, according to Garepy.

She believes the fire started because of the wood stove, but an official cause has yet to be released. She noted that there are around 80 units in the trailer court.

“This is the first fire that I know of, and I’ve been here ten years,” she said.

Garepy said that both McLean and a friend who was visiting got out safely, and there was no damage to other buildings on the property. The unit will unfortunately be torn down, but a timeline of that work is not available.

“I was talking to (McLean’s mother) because both of his parents own it, and they said they were gonna take care of the clean-up and everything, but that could take, maybe a couple of weeks,” she said.

“It’s a shame he lost everything…and we do have people who are trying to help him but right now, because he doesn’t have a place, there’s really nothing more we can do. We’re just grateful that he was not in it sleeping, and he made it out safely.”

Garepy said the response from the fire department was quick.

“They got the phone call at probably around two (a.m.) and by about five after they were right here because we do have the fire department down the street,” she said.

“We also apparently had to have Port Hardy’s fire department come out as well to fight it.”

A request for comment has been sent to Tim McLean.