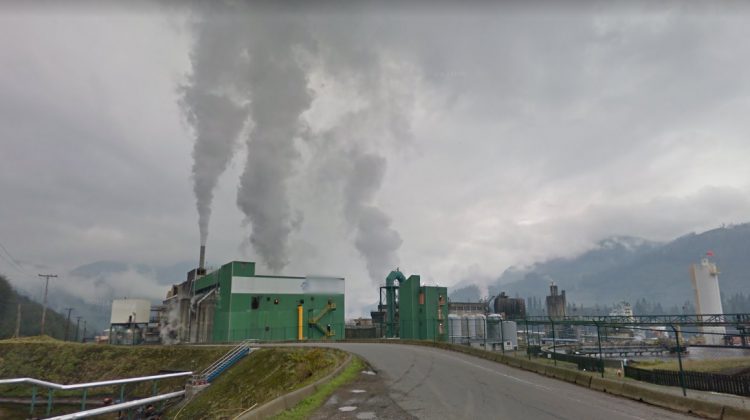 The mill in Port Alice is pictured on Google Streetview.

PORT ALICE, B.C- Employees of the dormant pulp mill in Port Alice have all been laid off.

That’s according to the village’s mayor, Kevin Cameron.

Reached by the MyTriPortNow.com newsroom on Thursday morning, Cameron stated that all the employees at the Neucel mill received lay-off notices on Wednesday, and it’s unknown if the facility would have any staff maintained.

While the lay-offs will be the latest blow to the village’s economy, Cameron indicated that the word “closed” had never been used to describe what was happening with the facility.

The mill made up 70 per cent of the community’s property tax revenues, and recently didn’t pay their roughly $1 million bill. That had a major impact on the services provided by the municipality, with the local arena getting forced to close.

He believed there would still be some security presence at the mill site, and said that there is a meeting today between Neucel and investors looking to re-purpose the operation.

He also said that the mill’s China-based ownership would be more willing to invest in the site if the “business environment” was better, mentioning the detainment of Chinese telecom Huawei CFO Meng Wanzhou by Canada as a factor in that environment.

He also believed that it’s unlikely the mill will open again, and with “past councils and past people in charge” failing to realize there had been a paradigm shift.

Council did meet over the layoffs last night, and he stated it would be a factor in their meetings in the times to come.

Concluding, Cameron said he didn’t want to drive panic in the community, and described the layoffs as “just another day”. He believed the community would get through it.

He was very confident things would work out.