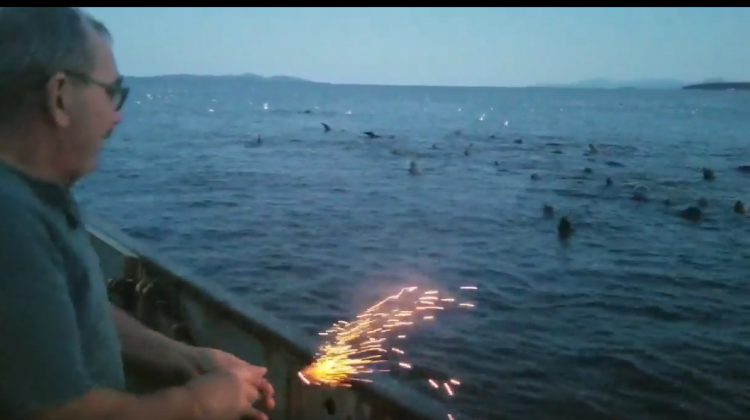 A still from the video, sourced from the clip shared by Thomas Sewid.

COMOX, B.C- The debate over whether or not to harvest sea lions in the Strait of Georgia has had another flashpoint this week.

In a video posted to the Facebook page of the Pacific Balance Pinnipeds Society (PBPS) on Tuesday, a man on what appears to a herring boat in the Strait of Georgia is shown lighting what is described as a bear banger and throwing it into the water, where a large number of sea lions are near the vessel.

The banger goes off, frightening the animals off, and the video ends.

The video was shared by page administrator and PBPS vice-president Thomas Sewid, who has been vocal about the need for a new West Coast seal hunt, and overall reduction in seal and sea lion populations to protect regional fish stocks.

Sewid also posted another video showing a large amount of sea lions climbing into nets off a herring boat, which he stated was doing a test to check for roe percentage.

“Seeing as there’s such a high number of British Columbia resident Stellar sea lions and thousands of invasive California sea lions, the herring are being dove upon,” wrote Sewid.

“This massive amount of sea lions diving on huge schools of thousands of tons of herring scares them to stay deep. This makes it so captains cannot catch herring, for they’re too deep for nets.”

“Tenaciously these crews are doing all they can to get a set so they can get a representative herring samples to test. This is supposed to be a multi-million dollar fishery, yet stupid obsolete laws impede proper sampling of the herring stocks all due to too dang many sea lions!”

The video has also been getting shared by area residents and groups angry about what they saw in the video.

In Sewid’s post, he said the banger was being used to “try and get the sea lion horde off” in order to allow the fisherman to work.

“It’s always to no avail, for in a few minutes they return,” wrote Sewid.

“Keep in mind what you hear and see, four times as many are down diving on the massive herring school 20 plus fathoms below the boat.”

He states that herring fisherman are trained to not make any loud bangs in order to avoid herring schools diving in the net, and pulling boats over. He also states that the sea lions could cause the herring to dive suddenly.

“We pray this never happens, but the stupid protection laws are only adding to the chance of this happening,” wrote Sewid.

“The sea lions need to fear we humans once again, for as one can see they have no fear. Bear bangers and sea lion bombs (underwater Cherry Bomb firecrackers) are not going to do it, for we fishers have been proving that for decades. The only way to see fear instilled upon the hordes is to once again shoot them.”

Reached for comment by the MyComoxValleyNow.com newsroom, Sewid indicated that the two videos were recorded between Comox and Qualicum Beach on Monday, with the first video recorded just before dark and the second once night had fallen.

Sewid also said he had spoken with the fisherman in the video.

“Everyone’s up in arms, a few of them anyway, over this video of a bear banger being let go, well the fisherman was trying to get those sea lions spooked away from them, so he could get over to where the school was a mile and a half away, and get his net out for the test,” said Sewid.

He stated the man had been trying to get the sea lions to go away in order to get a safe set and sample of the herring biomass.

He also believed that Fisheries and Oceans Canada (DFO) wouldn’t have any issues with the banger being used. As for anyone who had an issue, he had a quick answer.

“I’d tell them to shove that chunk of sushi with coloured small eggs into their mouth, and be quiet, because we are supplying eggs that are broken apart and dyed different colours to be put on your fancy sushi wraps in your sushi restaurants all through North America, and the world,” said Sewid.

“I don’t know why they’re getting upset, because if they get upset and stop the fishery, well they’re not going to have their beautiful tasty snappy eggs on their sushi.”

He stated that DFO, BC Wildlife, and the RCMP need to come and protect fishermen from sea lions, and that a commercial fishery of the pinnipeds would be good for BC’s coast, teaching sea lions their place in the animal kingdom.

“They’re not supposed to be biting humans, or threatening us,” said Sewid.

A request for comment has been sent to DFO.