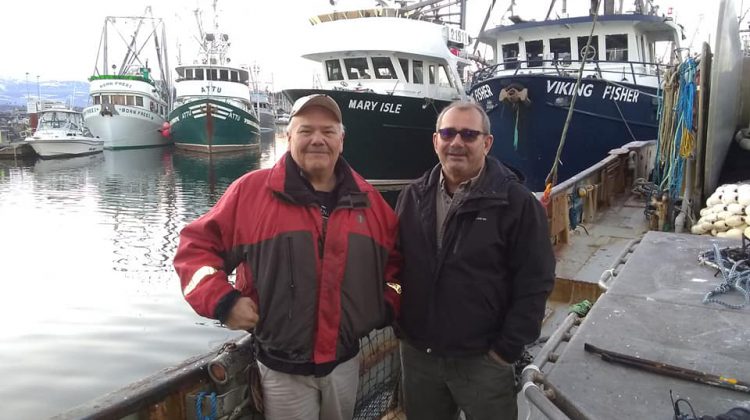 A photo of Marsden, right, and Thomas Sewid, left. Image sourced from Facebook.

Marsden is the man at the centre of the latest debate over whether or not sea lions should be harvested in the Strait of Georgia, after a video of him throwing what’s described as a bear banger towards a large number of sea lions near a fishing boat surfaced online this week.

The video was posted to the Facebook page of the Pacific Balance Pinnipeds Society (PBPS) on Tuesday, and was recorded earlier this week.

The video was shared by page administrator and PBPS vice-president Thomas Sewid, who has been vocal about the need for a new West Coast seal hunt, and overall reduction in seal and sea lion populations to protect regional fish stocks.

It’s been getting shared by area residents and groups angry about what they saw in the video, while others have been describing the action as a normal part of the herring fishery.

Reached for comment about the video, Marsden told the MyComoxValleyNow.com newsroom that the video was recorded as the herring boat was trying to get a test sample for the fishery.

The vessel had been surrounded by sea lions, according to Marsden, and the action in the video was an attempt to make them leave.

“Before we set, I threw it to see how long it would take for the sea lions before they would come back to the boat, and it didn’t take very long for them to get back, to before (he) put the banger in,” said Marsden.

He said that the sea lions had been preventing the test from getting done, and the fishermen from doing their jobs.

“I personally have gotten attacked by a sea lion, three years ago, and safety is number one in my operation, to myself, and my crew, and the boat,” said Marsden.

“What we were trying to do as well is get those sea lions away from us, from the boat, so that at least we can do what we’re trying to do, get the fish without having our lives in danger. Anybody that’s ever been bitten by a sea lion the way that I have, don’t take long to come to the conclusion that they don’t want that to happen a second time, to them or any of the crew on board.”

He said it was understandable that the general public wouldn’t know how the herring fishery worked.

“When they see something like that (the video) it automatically puts a black cloud over the fishermen on the BC coast, which is very unfortunate,” said Marsden.

“I can understand how it happens, but it also makes me cranky when the media does something like that without having the other side of the story.”

He compared the use of the explosive to a hiker taking bear repellent with them during the salmon run.

“I think that’s where the name bear banger comes from,” said Marsden.

“That’s a similar situation here, except it’s a creature in the ocean where we’re trying to make a living. That’s about the best comparison I could give.”

He was also glad that the video was getting widely viewed.

“At least they’re getting educated on when they do hear and read in papers and so on and so forth about the battle we’re having out here,” said Marsden.

“There’s nobody out here that is deliberately going out to kill sea lions. I don’t have a gun on the boat, I’ve never had a gun on the boat for many, many years, and I have no intention of bringing one aboard, but if myself and the crew is threatened by sea lions and prevented from doing our job, I figure the least I can do is set off a bear bomb to try and scare them away from us. If people think that’s a ridiculous, crazy thing to do, and I should be thrown in jail, bring in the cops with handcuffs and take me away, because I will not stop protecting myself and the crew on the boat.”

He also hoped the federal fisheries department (DFO) would speak with him about the incident.

As for anything he could have changed in the video, Marsden wished that there hadn’t been laughter, though he did say that if a person can’t laugh “every once in a while”, they might as well dig a hole and climb in.

“As for the bear bomb, I have no regrets whatsoever about chucking it in,” said Marsden.

“If I had more aboard the boat, I would do it again every time I had to. I don’t do it just because I want to do it, but if I feel that it’s necessary to be done, every time.”

In response to a request for comment about the video, DFO supplied the following statement:

“Fisheries and Oceans Canada is aware of a video showing a man throwing what appears to be a lit noisemaking device known as a “bear banger” into a crowd of sea lions in the Strait of Georgia.

DFO fishery officers from Nanaimo and Campbell River are aware and investigating whether the incident contravenes Section 7 of the Marine Mammal Regulations, which make it illegal to disturb, harm or kill marine mammals. Charges may be laid.

DFO reminds fishers and the public that it is illegal to disturb or harm marine mammals by any means, including by use of acoustic deterrents. Anyone witnessing a potential contravention of the Marine Mammal Regulations should contact their local fishery officer detachment or call 1-800-465-4336 (all of British Columbia) or 604-607-4186 (greater Vancouver).”