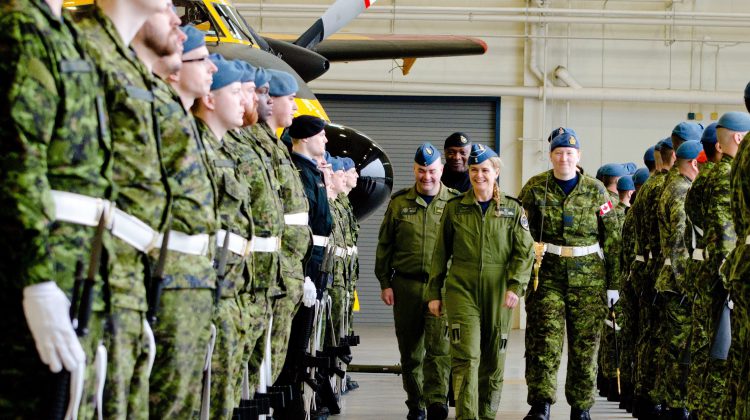 Governor General Julie Payett reviews an honour guard in 14 Hanger at 19 Wing Comox on the morning of March 11th, 2019. Photo by James Wood/98.9 The Goat/Vista Radio

Payette, who is currently serving as the country’s 29th Governor General, made a brief visit to 19 Wing Comox today. It was the last stop on a tour of the West Coast, which had previously gone through Vancouver and Victoria in the last two days.

After reviewing a guard of honour in 14 Hanger, Payette spoke briefly with reporters. She said she had been to the base before, once during an airshow and another time to do pilot survival training, which brought back memories. 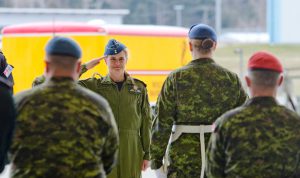 Governor General Julie Payett salutes the honour guard in 14 Hanger at 19 Wing Comox on the morning of March 11th, 2019. Photo by James Wood/98.9 The Goat/Vista Radio

“The water is not the warmest, around here, as you can imagine,” said Payette, asked about the experience.

“However, I did get to fly the Buffalo on my way in here, if anything, certainly I miss the opportunity to fly airplanes, but in a few years, I’ll be back doing that again.”

Asked about what she thought of the issues over the SNC-Lavalin case back in Ottawa, she said her role was to follow the affairs of the government, and she did very closely.

“I’m at the service of Canada, and guarantor of the constitution,” said Payette.

“I continue to do that work, and we’re a really, really sound democracy. I’m very proud of my country.”

She also offered praise for the Canadian Forces while speaking with the press.

“We have the largest and the longest shore, in the entire world, because we’re a very, very large country,” said Payette.

“Most of it is uninhabited, so it’s through our Forces and our airplanes that we can make sure our borders are safe.”

Payette continued her tour with a look at two aircraft, with the first being a CH-149 Cormorant helicopter used for search and rescue by 435 Transport and Rescue Squadron, and a CP-140M Aurora from 407 Long Range Patrol Squadron used to monitor the Canadian coastline. 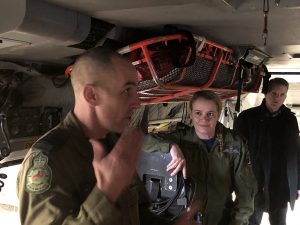 Governor General Julie Payett listens to a briefing in the CH-149 Cormorant helicopter at 19 Wing Comox on the morning of March 11th, 2019. Photo by James Wood/98.9 The Goat/Vista Radio

Lieutenant-Colonel Curtis Wright, the acting wing commander of 19 Wing, said it was an honour for Payette to visit the base.

“She wanted to seize this opportunity to come up, visit us, and get an exposure first hand on what we do here, both the search and rescue squadron at 442 and the patrol squadron at 407,” said Wright.

“It was a wonderful opportunity, not only to see the operations that we do, but also meet the people, the men and woman who work hard every day to support Canada.”

She flew out on a government Challenger jet, headed back to Ottawa.