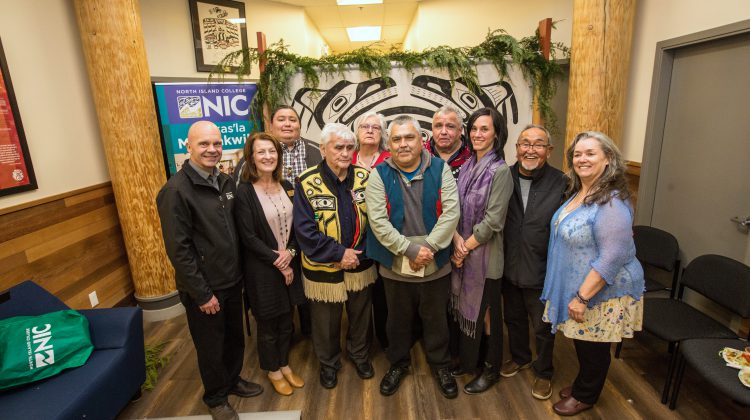 PORT HARDY, B.C- A gift has been given by community elders on northern Vancouver Island to North Island College.

The college has announced that their Port Hardy/Mount Waddington regional campus in Port Hardy will now be known as Mix̱alakwila, meaning “maker of what’s been dreamt about.”

The renaming is the result of a series of gatherings between elders from different communities, and Chief George Hunt.

“The conversations included rich discussions of what NIC and access to education means to First Nations communities and Indigenous learners,” read the college’s announcement.

The elders chose the new name because they believed the college is a place where dreams for the future can come true.

“I want to thank the Elders and community members who have honoured us with this new campus name,” said NIC President John Bowman.

“NIC’s first Indigenous campus re-naming is a historic event for the college. It signals a permanent, ongoing commitment that Indigenous Education is a priority and that we value the relationships established with First Nations communities.”

According to the school, the re-naming is part of a strategic plan to enhance Indigenous-centered services, spaces, learner success, and learning environments.

“Naming the NIC campus in Kwak’wala recognizes and honours the traditional territory of the Kwagu’ł and is an important step towards reconciliation,” said Sara Child, NIC’s Aboriginal Education Facilitator, in the announcement.

“We hope the new campus name will feel welcoming, especially for those who may have previously felt excluded from higher learning and create a place where their Indigenous identity and knowledge are respected.”

The programs are meant to fill gaps in Indigenous language learning opportunities.

“This program is intended to be a small step to fill the gap and support the aspirations of the nations we serve,” said Child.

“Our Elders have been warning us for decades and demanding that actions be taken to support the resurgence of our languages and restoration of our wellness. I am honoured to say that the college is not only listening but taking action. What is reconciliation if it’s not about responding to the voice of the Indigenous communities we serve?”