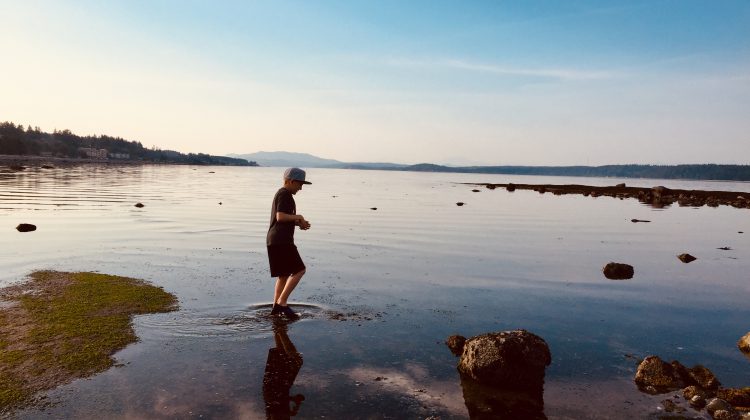 A boy walks in the ocean next to the Campbell River Seawalk as temperatures reached the mid-20s degrees Celsius on Monday, May 27th, 2019. Photo by Troy Landreville/1240 Coast AM/Vista Radio

Sunday and Monday were especially warm, with a couple of heat records set on northeast Vancouver Island.

On Monday, Comox’s temperature hit 27.9 degrees Celsius, eclipsing the 72-year-old record by 0.1 of a degree.

Meanwhile, the thermometer in Campbell River climbed to 29.1 degrees on Sunday, smashing the previous record for May 26 set back in 2005. The old mark, set 14 years ago, was 27.5 degrees.

Sekhon said that while it will be above average for this time of the year, temperatures will cool slightly as the week wears on.

“We’re still going to remain warm, but not quite as hot as it has been,” he said.

By the weekend, the North Island could see a chance of showers along with a slight cool down as a cold front approaches, he predicted.

On Tuesday, Environment Canada meteorologist Armel Castellan said a ridge of high pressure anchored over the south coast and Vancouver Island has brought extremely warm and dry conditions to the region.

“We’re all concerned about too much heat and dryness, especially in these months leading up to summer,” Castellan said. “It’s not summer yet and we know that summer is dry.”

He also noted that a “very slow breakdown of this ridge” will see temperatures edge lower, with highs in the mid-20s this week.

“(It’s) certainly warm,” Castellan said. “Warmer than you would typically have in late May which is only highs of 19 (degrees) and lows of eight.”

Castellan also predicted that temperatures will moderate by the end of the weekend and early next week.