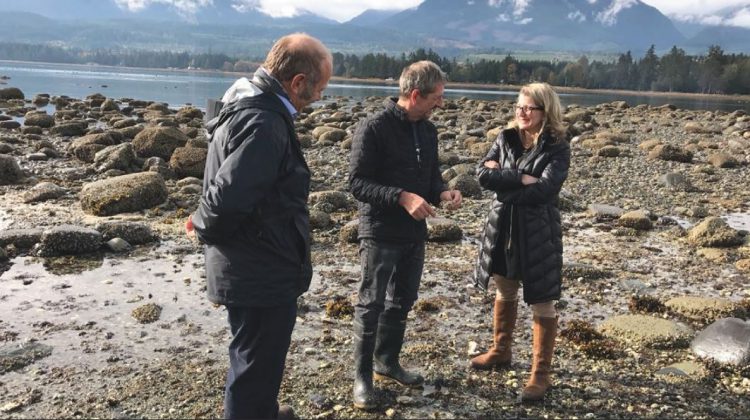 VICTORIA, B.C. – The province is giving B.C. oyster growers a financial ‘shuck’ in the arm.

The B.C. government announced today that more than 100 oyster farmers from coastal communities are receiving up to $10,000 from the B.C. Oyster Recovery Fund to restock their beds.

About one-third of the farms that received support through the fund are in Baynes Sound, with others near Cortes Island, Okeover Inlet, Lemmens Inlet, Barkley Sound and Nanoose Bay.

This is part of the government’s and BC Shellfish Growers Association’s (BCSGA) efforts to help ensure B.C. oysters are available this summer and beyond.

In an interview with the MyTriPortNow.com newsroom, B.C. Minister of Agriculture Lana Popham said that last year, oyster growers “came up against a massive barrier for their industry.”

“And at that point, we made a decision as government to create a B.C. Oyster Recovery Fund to help them out,” she added.

Popham said the government funneled $1.3 million into the fund last June, which will be accessible for growers to purchase oyster seeds.

“We had a round table, we discussed with the growers what their needs were, and we figured that this was probably the quickest form of aid that we can respond with,” Popham said.

A total of 100 oyster farmers applied for the funding.

“And we have given out $860,000 in support, and that’s specifically to buy seed for their farms,” Popham said.

Popham is deeming the initiative a success.

“We’ve already heard (that) it’s made a huge difference for them,” she added. “Without this fund, we would have seen many of them just shut down. So as far as the importance to the economy, it’s huge. The (B.C.) oyster industry is known around the world, we grow an excellent product, and it totals over 7,000 tons of oysters.”

“It’s very important to our government that it succeeds, and we’re trying to find every way that it does,” Popham said.

͞͞The recovery fund was seen as a positive step and concrete action toward recognizing the value of the shellfish industry by Popham and the B.C. government, said Erin Latham of K’awat’si Shellfish.

“As a new shellfish farm and as a new business of the Gwa’sala-‘Nakwaxda’xw First Nation, K’awat’si Shellfish is also developing a research program, as well as improving transportation to get our GwiGwi oysters to the local B.C. seafood market.”