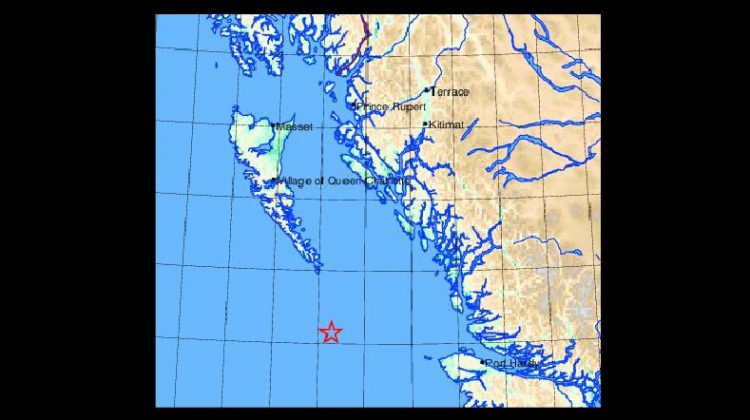 NORTH ISLAND, B.C. – An earthquake in the ocean shook parts of northern Vancouver Island and the north coast.

Bird said that luckily, the earthquake was relatively minor and a fair distance from land.

“It’s 5.8 and it’s pretty far from the coast,” she said. “Had that been directly underneath Vancouver Island, many more people would have felt it, but because of its location, the waves had weakened by the time they reached the shore.”

Meanwhile, there is no threat of a tsunami.

“There is no threat,” Bird said Thursday morning. “If a tsunami was going to happen, it would have happened by now. And it’s the kind of faulting that does not cause (a) tsunami. The only reason there would be a tsunami is if it triggered, say, an underwater slump or a landslide underwater and that would have shifted the water.”

But she noted that even in that scenario, it would have triggered a “different type of tsunami and usually they only impact the near shore, they don’t impact places that are further away.”

A few aftershocks have already been recorded.

“In this sort of area and this type of earthquake and this magnitude, we would expect to see a few dozen (minor) earthquakes within the next couple weeks,” Bird said.

The area is known for occasional “earthquake swarms,” Bird said.

“We do see sudden spurts of activity for two or three weeks at a time and in that period it gets quite busy. There will be a few dozen (earthquakes), sometimes more than that, but we tend to only locate the larger ones because the smaller ones are really not important to our database.”