Vancouver Island group calls on CBC to ‘Change the Debate’ 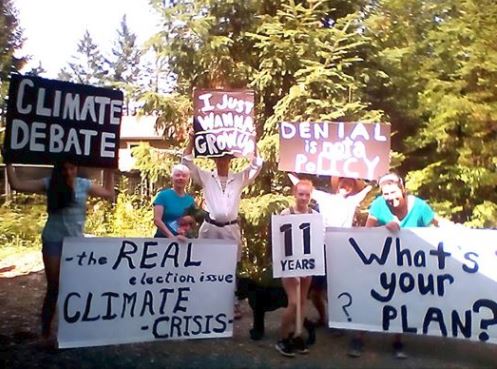 Signs were created ahead of a July 17th national action call to demand the CBC host a federal leaders’ debate on climate change and a Green New Deal during the October election. (Supplied by Dan Vie, Facebook)

The Comox Valley Nurses for Health & the Environment wants the CBC to host a federal leaders’ debate on climate change and a Green New Deal during the October election.

The group says that as Canada’s public broadcaster, the CBC has a moral obligation to make sure that every single person in Canada knows which of our leaders have a real plan to tackle the climate crisis.

“We’re in a climate emergency. Fires, floods, and rising temperatures are already ravaging our communities,” the group said on its Facebook page.

“The government we elect in the 2019 election will lead us through four of the 11 remaining years scientists have given us to act on climate. This is an opportunity that we may never see again and one this movement can’t afford to miss. Over 11 million people tune in to watch federal leaders’ debates during Canadian elections — and every one of them deserves to know which of our politicians has a real plan to tackle the biggest crisis of our time.”

The group is made up of current, retired, and student nurses. Their coordinator, Helen Boyd, said climate change is affecting people’s health.

“Our focus is because we’re very attentive to the health of our population and climate change has huge effects on our population’s health,” she said.

“For instance, with wildfires, there are often worsening attacks of asthma, there is an exacerbation of COPD, there’s an impact on cardiovascular disease… so climate change will have and is having some impacts on people’s health and that’s why our commitment of being involved in a climate change debate.”

‘Change the Debate’ events are being held nation-wide, from Halifax to Vancouver Island.

The nurses believe that because it is funded by public money, the CBC has both the power to organize a federal leaders’ debate and a responsibility to listen to the people.

The group is inviting people to join them at Comox’s Marina Park at 6:00pm today as part of a nation-wide call to action.

There will be speakers and a group photo of people holding posters, banners, and placards that will be sent to the CBC.

“We have to act now as CBC officials finalize their plans for their elections coverage,” the group said. “That’s why, on July 17th, we will gather in our communities outside of CBC studios, during the six o’clock news, to send a clear message: Canada needs a federal leaders’ debate on climate change and a Green New Deal.”

“I’m delighted to see that here in our municipality and the regional district have all declared a state of climate crisis, so that declaration has been done, and what we’re really wanting to see, are what will be the climate action plans that develop from that; what tangible steps will all levels of government – municipally, provincially, and federally – take to address this important issue.”

She added that climate change has been declared as the biggest health challenge of the 21st century.

“So it’s important for us as healthcare professionals to come on board and attend to this.”