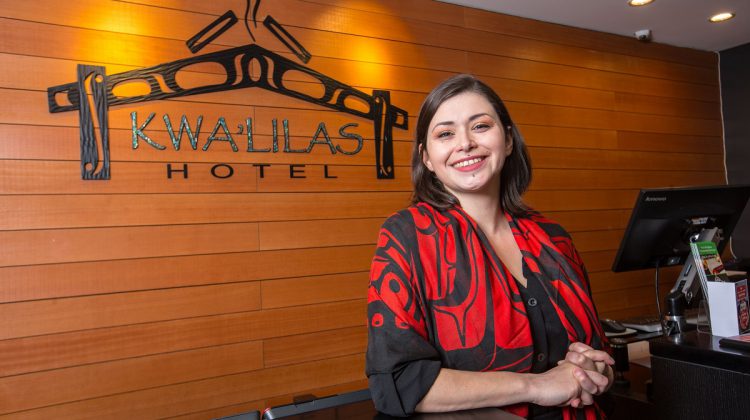 Zoe Speck is a Hospitality and Tourism student at NIC (Kim Stallknecht, supplied by NIC)

A North Island College student is learning the hospitality ropes in Port Hardy.

The school says it’s a combination of Indigenous-led tourism and NIC’s training. Zoe Speck is putting her training to work at the Kwa’lilas Hotel while she earns her Tourism and Hospitality Management certificate. The Kwa’lilas is owned and operated by Kawatsi Economic Development Corporation.

That’s the economic development arm of the Gwa’sala-‘Nakwaxda’xw First Nation. Since opening in 2017, the school says the hotel has helped put Port Hardy on the map as a tourism hub and an emerging destination to host events and conferences.

Speck was among the first new hires at the Kwa’lilas. She started as a bartender and quickly advanced to become the restaurant supervisor and catering and events coordinator. Speck began her Tourism and Hospitality Management certificate at NIC’s Mixalakwila campus in January of 2018 and is set to finish her training at the end of this year.

Born and raised in Alert Bay and a member of the ‘Namgis First Nation, Speck’s eyes light up as she describes working at the hotel and witnessing the growth of Indigenous-led tourism in the region.

“It’s a different sort of pride you have, being a First Nations person and growing up on the reserve and having that background,” she said. “It’s just so inspiring to be a part of a progressive, First Nations-owned and operated venture. It’s a big deal.”

“Our territory is so rich with resources and it’s a wonderful platform and base for people to come and experience tourism,” she continued. “Being part of that and having the opportunity to watch that grow and be sustainable in our communities is a great thing.”

NIC says Speck’s tourism training has allowed her to excel in her current role and has opened new possibilities for her career. Her duties at the Kwa’lilas now include organizing catering for large tour groups and hiring and onboarding new staff, as well as other administrative responsibilities.

“The business communications training has been helpful as the restaurant supervisor and the human resource management training has been a big eye-opener as well,” said Speck. “A lot of what I’ve learned has been on the job, but my tourism education has really augmented that experience and given me a different perspective.”

“The certificate program and my instructors have given me a lot of motivation to think about what I can do within the industry,” she added. “When I started here, I didn’t think that this was going to be a career for me, but it’s opened up a lot of doors. The training I’ve received at NIC has been a big part of that.”