BC Ferries shore cleanup gathers over 3000 pounds of garbage 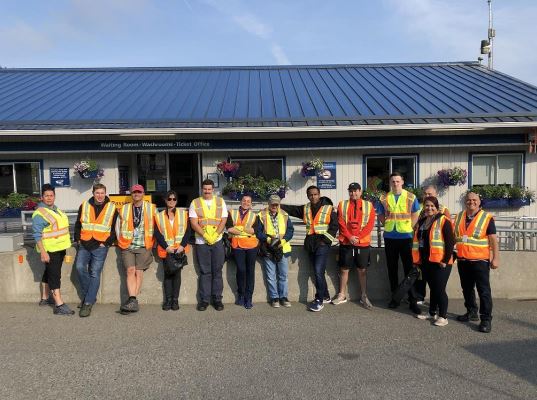 Employees at Skidegate on Haida Gwaii participated in a shoreline cleanup in July. (supplied by BC Ferries)

BC Ferries employees across the province have managed to collect 1, 725 kilograms (3, 802 pounds) of garbage.

The shoreline cleanup effort took about 330 BC Ferries employees. They split into teams to cover 50 kilometres of shoreline.

BC Ferries says some of the items employees collected included a baby stroller, various car parts and a can of ham.

“Our employees live and work in coastal British Columbia, and are dedicated to making a positive impact in the communities we serve,” BC Ferries’ Vice President of Marketing and Customer Experience Janet Carson said.

“Caring for the environment is the cornerstone of the work we do with coastal communities. It’s a natural fit for us to help keep BC beaches clean for our marine life and everyone to enjoy.”

Participating in shoreline cleanups is one of the ways the company is doing is show its care for the environment. Earlier this year, BC Ferries announced the Spirit of Vancouver Island is back in service after upgrades so the vessel now uses natural gas.

BC Ferries is also adding two new Island Class vessels to its fleet later in the year. The vessels are hybrid battery electric and will be fully electric once shore technology becomes available.