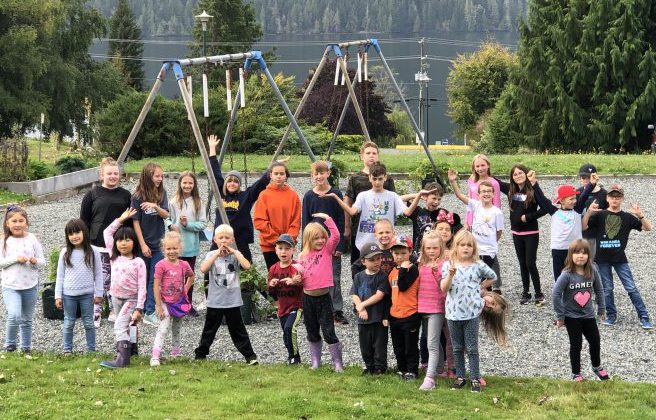 A new humpback whale has been sighted in Port Alice waters this year.

It was seen travelling with another humpback nicknamed Whiskers and her new calf. After observation from residents and the Marine Education and Research Society, the third humpback was identified as BCX1100.

BCX1100 has a damaged fluke, with the right side limped over. Jackie Hildering is a researcher and education and communications director for MERS. She says the cause of the injury is unknown.

She says the injury dates back to 2010 and could’ve been caused by a vessel strike or entanglement, among other causes.

Hildering picked the students at Sea View School to help MERS name both the calf and BCX1100.

Natalie Stewart is the secretary librarian for SD 85 and noon-hour supervisor at Sea View. She says she thought it was a great idea right off the bat to involve the students.

“Our school already has a huge focus on sustainability. We raise bees, we do gardening and have a full circle program at our school to begin with, so this just really fit in,” Stewart said. (2:40)

“My daughter actually was the one who looked at the whale and we talked about it and she thought Terry would be a good name – or Terry Fox. We came to school and presented all of the students the opportunity to name the whale.”

She says they went through the whale catalogues from the DFO and MERS and looked at how names were given and how those names usually stemmed from something that is easily identifiable on the animal.

As they went through the catalogues, Stewart says the students were able to learn about how far the whales go up and down the coast. While it was an exciting opportunity, she says that helping to name the whale became a learning tool as the students began to do their own research as well.

It also so happened that the school is gearing up for its Terry Fox run, which is why “Terry” was at the top of students’ minds as well.

“The right side of this whale’s fluke was damaged at some point. This whale also has some handicap and it was Terry’s (Fox) right leg that was amputated and he did amazing things.”

Stewart says it was good for the students to see that humpback whales are coming back to the inlet, especially after being whaled for so long.

“This is our second chance with the humpbacks. They were whaled until the 1960s in this area and the rate at which they’re coming back to our area is absolutely incredible,” she adds.

“I’ve lived in Port Alice for close to 40 years and I have never seen a humpback whale activity in our inlet like we have here.”

Stewart adds that now, the kids are trying to also contribute to the research and conservation of the whales.

Sea View’s Terry Fox run is scheduled for this Friday.