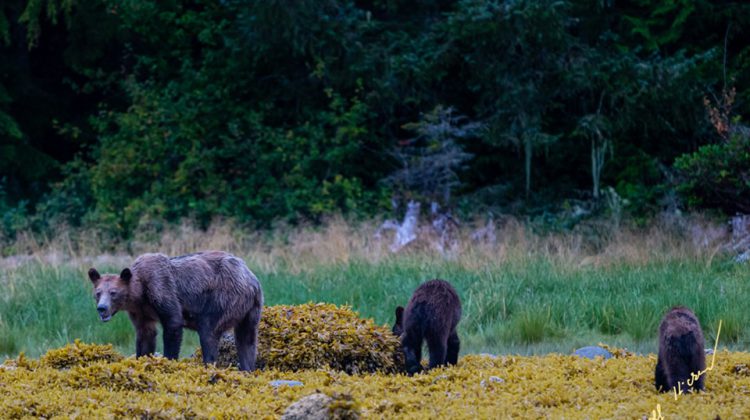 Wildlife photographer Rolf Hicker believes some of the grizzlies in the Broughton Archipelago won’t make it through the winter.

Hicker has photos of the emaciated bears and their cubs to drive his point home.

CTV is reporting that a group of volunteers from Mamalilikulla First Nation distributed 500 pink salmon along the shorelines where the grizzlies have been known to frequent.

“I was out yesterday and seeing that the bears are taking the fish, so that’s good news,” Hicker said.

Even so, Hicker expressed his deep concern for the grizzlies.

All of the photos were taken along Knight Inlet on B.C.’s central coast.

“There are some bears out there, they look absolutely horrible,” Hicker said.

Hicker is laying the blame on the aquaculture industry in the region.

“It’s not that I’m a big fan of interfering with nature but we interfered in the first place with our fish farms here, which I believe are the reason why we don’t have any salmon left,” he said.

Originally from Germany, Hicker made B.C. his permanent home 20 years ago.

The Port McNeill resident has been doing tours of Knight Inlet for 16 years and knows the area very well.

That’s why he is so frustrated.

“The problems are known and nothing is happening, so I’m kind of happy that my post made a little bit of an impact here, at least rattled some people up. I’m not here to point fingers. I’m a photographer. For me, it is important that I get that message out that this is what’s there. I received a lot of blackmail, a lot of hate mail, people accusing me of photoshopping the images and global warming and blah, blah, blah. These are just effects I’m showing out there.”

Hicker said he is a conservation photographer and notes this is what he’s seeing.

He hopes the images will spur action.

“I want to make the world know about those problems so that people in power can start making decisions based on what they can see,” Hicker said.

This is not a new problem, Hicker said.

“All of a sudden it got attention because people are obviously very shocked by those images. I want to support First Nations so that they can do steps to support bears in their territory.”

And, Hicker said, turning a blind eye to the problem isn’t going to make it go away.

“The rest is up to the scientists and researchers to tell people what’s really going on. It’s all known issues.”

He said time is running out for the grizzlies, adding that moving fish farms out of the Broughton is a solution.

“We are already not seeing salmon coming back for years,” he said. “This is not a new thing. I hope some people in power maybe have the guts to do something instead of only talk. I’m really glad the Mamalilikulla did something in their territory and we all have to stand together to make a change, here, and if we all don’t stand together soon, then it will be too late, anyway.”

We have reached out to Mamalilikulla First Nation for more details.

CERB being expanded to include more workers