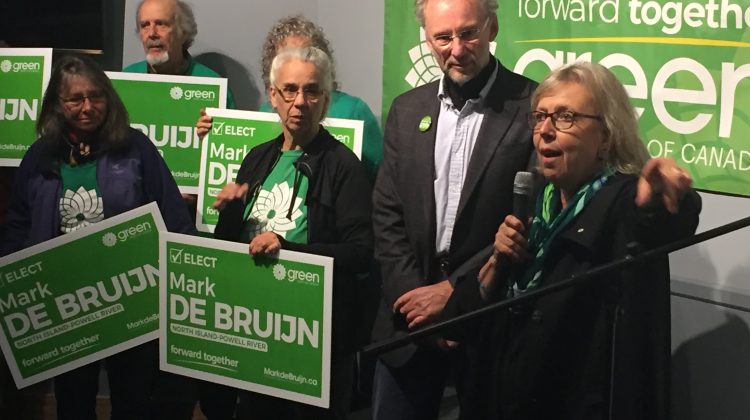 During a rally for North Island-Powell River candidate Mark De Bruijn this morning in Campbell River, May said the Greens have a plan to do just that.

“Over a period of five years, we will take the toxic fish factories out of the water and regulate them to be on land, because open pen fish farming is a threat to our wild salmon, it’s a threat that has been well analyzed and well understood,” May said.

She noted that there are successful aquaculture operations on land already in Canada.

May said open-water fish farms can become clean aquaculture on land and should be co-managed, if not outright owned, by Indigenous Nations on their own territory.

In the case of carnivorous fish such as salmon, May said the Greens want to stop harvesting smaller wild fish and turning them into fishmeal for fish farms.

She added that aquaculture as food production should be run under the Department of Agriculture and Agrifood Canada and the Department of Fisheries and Oceans “should return to its core mandate to ensure the ecological health of our waters and our wild fisheries, and the DFO should have nothing to do with promoting aquaculture.”

Moving on to gang crime, May said we need to provide law enforcement with the tools they need to track down, arrest, prosecute, and take people off the streets.

May also touched on decriminalizing illicit drugs and ensuring a safe supply to keep people from dying due to the contamination of fentanyl.

“If we don’t decriminalize, our own kids are at risk, families that you know are going to lose people because fentanyl contamination is a poisoning crisis, not an overdose crisis.”

She said a safe supply would be screened to ensure it doesn’t have fentanyl.

Looking at the nation as a whole, May said it’s time for a change.