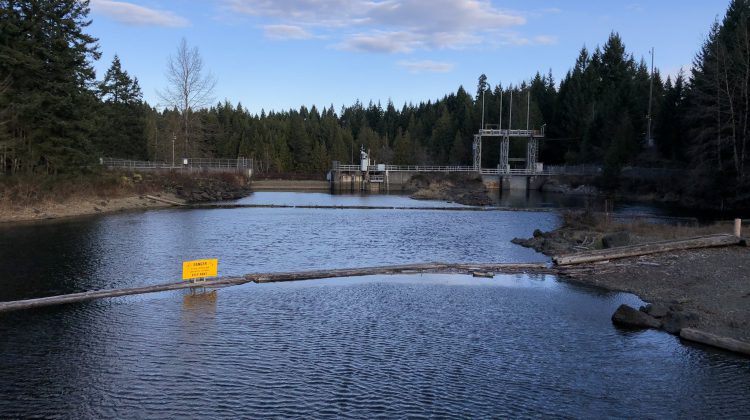 BC Hydro spokesperson Stephen Watson said the reservoir level is generally where it should be for this time of year, despite a very dry November. (Stephen Watson, Twitter)

The forecast calls for rain and slightly above normal temperatures across Vancouver Island and the Sunshine Coast over the next few days.

Tomorrow is the outlier with partly sunny skies.

We could use some of that wet stuff after an abnormally dry November, which is usually the rainiest month of the year.

The Comox Valley only saw 42 percent of normal precipitation, making it the 13th driest November on record.

In Campbell River, only 117 mm fell, which is roughly half the normal amount of the month.

Further north, Port Hardy only saw 209 mm of rain compared to its normal of 311 mm.

On the Sunshine Coast, Powell River only managed to get 88 mm of precipitation, most of which fell in the middle of the month.

This falls far short of its normal amount of 178 mm.

“Most of the impacts are obviously felt then, but there are impacts that can be attributed in the fall and winter months, as well, the most active months of the year, because the highest proportion of total rainfall happens during November and then to a certain extent, December and January, so certainly it is something that the ecosystem obviously feels when the rainiest months aren’t as rainy as they have been in the climatological past.”

He said a winter drought could spell trouble down the road.

“If we haven’t had all of our fall and winter precipitation then obviously that’s going to have an impact on how things shape up for the spring and summer.”

Castellan said the large scale pattern is to blame for the dry November.

“So we had a very strong blocking ridge at the start of the month, and it really lasted over from October and then we had one active week-and-a-half stretch there in the middle of the month with a low-grade atmospheric river… and certainly that’s what we expect to see, maybe even two of those or at least an active storm cycle that kind of lasts most of the month,” he said.

“But because we had that really strong blocking ridge at the start at the month and then again at the end of the month, including Arctic air that swept in… that spells out the overall pattern (as to) why things were so dry.”

As a whole, temperatures were normal or slightly above normal range across the region for most of last month.

BC Hydro spokesperson, Stephen Watson, said November ended up as the driest on record (31 percent of normal) for precipitation in the upper Puntledge River watershed.

“We’ve had quite a dry year,” Watson said. “We had spring that was very dry and we had of a wetter-than-normal summer, thankfully, October was about normal, but November was actually the driest month for November (that) we’ve seen in about 39 years.”

He said November, December, and January is the time of flood risk management consideration but right now, it’s the exact opposite with the dry weather.