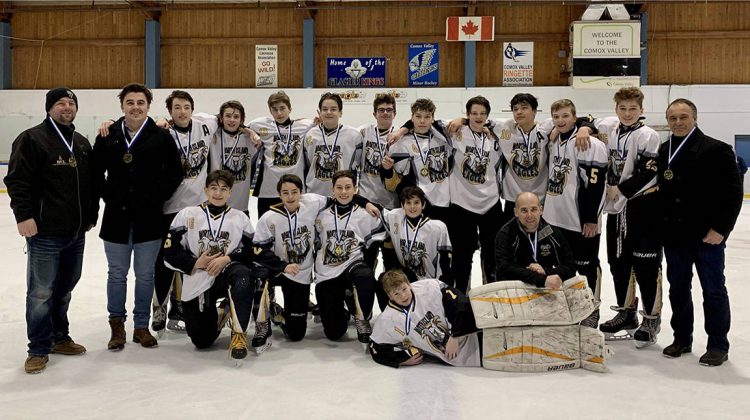 The North Island Bantam Eagles are bringing back a gold medal.

The team travelled to the Comox Valley to take part in a Bantam Tier Two tournament at the start of the new year.

Things started off well with a win over the Tier 1 Comox Valley Chiefs 7-2.

After that, they faced the Tier 2 Victoria Admirals and managed to pull out a big 6-3 victory.

Head Coach Glenn Moore says the wins were good because they didn’t know what to expect heading in.

“We were playing two out of three teams that we had never seen before. We usually play the tier one team in Comox and playing their tier two team we weren’t sure what to expect. The first games against the teams, we caught them off guard with our speed and our size.”

The team kept the wins rolling after defeating the Cloverdale Colts 6-1 the following morning.

From then on, the 3-0 Eagles were facing teams they had already played, including the semi-final matchup against the Tier 1 Comox Valley Chiefs.

Moore says that matchup caused them to make a few changes.

“You go in against opponents, especially when you face them for a second time and you make a game plan around how they played their first game and they come out with something totally different, that we weren’t expecting,” says Moore.

“A lot of teams came at us with a 1-2-2 offence so they had one forechecker and we’re used to having two guys deep so our defensemen were a little confused about what to do with their first pass. It took us a while but we were able to adjust and make changes on the fly.”

On January 4th the team played the Cloverdale Colts in the gold medal game and won 5-3.

Coach Moore says normally the team doesn’t treat tournaments as a big win, but he feels it will be a big motivation for the rest of the season.

“We always say that tournaments don’t mean much to our overall season because they don’t count towards the standing but now moving into two weekends of road games where we’ve got four games left before playoffs, coming out of a tournament where you win a gold medal I think momentum is on our side.”