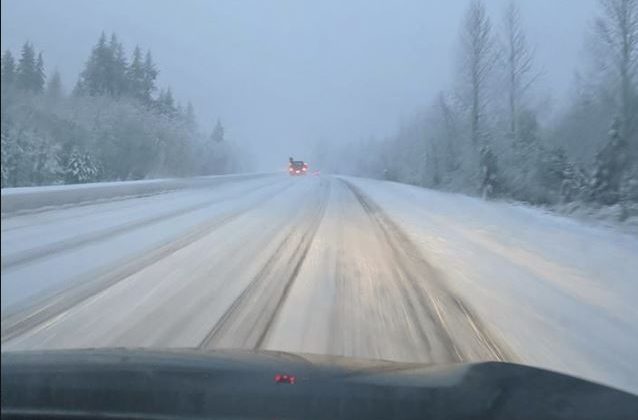 Emily Bohn took this photo of the inland highway off of Jubilee Parkway in Campbell River on Friday morning. (Emily Bohn, Facebook)

If you’re wondering where winter’s been, it’s here.

From blowing winds to snow, to slush, to a deep freeze starting early next week, you should be prepared for almost everything.

Environment Canada meteorologist, Doug Lundquist, said depending on where you are today, we’ll be seeing snow, or cold rain.

“There’s snow mixed with rain, even at sea level, and just over higher terrain, you don’t probably have to go up more than 100 or 200 metres and get inland from the water and it’s mostly snow right now,” he said.

Campbell River, Courtenay, and Powell River were under snow and wind warnings, while Port Hardy is under a wind warning.

The snowfall warning has since ended.

Southeast winds of 60 to 80 km/h developed morning over the Southern Gulf Islands, the north and central sections of East Vancouver Island, Sunshine Coast, as well as Greater Victoria near Haro Strait.

The winds are expected to ease near noon as the front exits the region.

As for the snow, it’s expected to transition to rain by mid-to-late morning at the lowest elevation.

But over higher terrain, it’ll likely remain mixed rain and snow throughout the day.

This pattern is going to stick around, before an Arctic front moves in early next week.

It’ll bring with it frigid weather by our standards, with highs between minus-one and minus-six, according to Environment Canada’s long-range forecast.

“By Monday night into Tuesday, we could see overnight lows into the minus-eight degree range,” Lundquist said.

Brace yourself, because snow is also back in the forecast next week.

Lundquist said the white stuff is “almost a certainty.”

“We’ll get minus-eight, maybe (minus)-10 there on Monday in some of the areas further north, and then what’s going to happen probably more Tuesday night into Wednesday from Campbell River south, and as early as Monday in Port Hardy, a new system (is) coming in,” Lundquist said. “And because it’s going to try to warm, that’s usually when we get our big snows, even at sea level, even on Vancouver Island.”

“We couldn’t be more into the middle of winter,” he said. “So we have this collision of warmer air coming from the west, and the Arctic air coming from the north. So what happens is, this Pacific air is just cold enough right now that (it’s) able to snow, even close to sea level, it’s just cold and unstable.

“But once the Arctic air which originates in the Yukon and Northwest Territories moves out from the Interior over us, then we get that really cold, frosty night, and then when it tries to warm up again it’s that Pacific air again colliding with the Arctic air.”

He said that’s likely what’s going to happen next Tuesday and Wednesday.

And while the forecast calls for frigid weather next week, it’s not likely going to break any records, Lundquist said: “The record lows this time of year in the minus-eight to minus-18 degree range, maybe even some touching (minus-)20 some days later this month.”

He added that the only chance of breaking any cold records in the region is on the “weak” record-breaking days.

Lundquist said there is no relief in sight.

“It’s so far away right now, and the computer models are giving me different scenarios,” he said. “Some of them are a bit warmer than others but even the one that’s a bit warmer isn’t really warm enough to get us right back to average so it could take longer.”

He said the reliability of the forecast beyond five days is “somewhat suspect.”