Final phase of waterfront project along Highway 19A set to begin 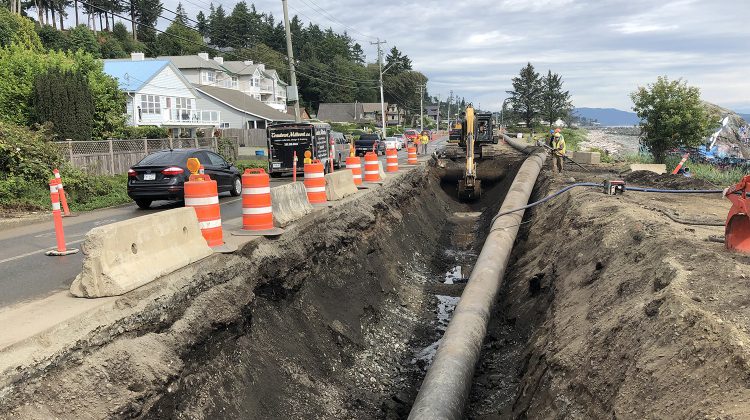 Photo taken in late September of pipework along Highway 19A. (supplied by the City of Campbell River)

Construction on Highway 19A is starting up again.

The city says that this final phase will not close the route to traffic.

Work on the final stretch of the three-year upgrade project, north from Rockland Road to First Avenue, is expected to continue into late fall, with two lanes of traffic flowing most of the time.

In some cases, single-lane, alternating traffic or temporary closures will be required.

In the first two years of the three-year Waterfront Project, roughly two kilometres of new sewer and water pipes have been installed along Highway 19A north from Rockland Road.

“This a big year for construction, with a lot to accomplish, and there will be many improvements that residents will enjoy once the work is complete,” Mayor Andy Adams said.

“This is a critical improvement to some of the most important services of our community, and we are pleased to be able to make these upgrades and minimize disruption for the people living and commuting in the work zone.”

An update is being provided at a drop-in open house, happening March 16th from 5:00pm to 7:00pm at the Maritime Heritage Centre.

It’ll cover the assessment of the midden found last fall, and the plans for traffic movement on Highway 19A this summer.

The completion of sewer pipe installation was postponed last fall after the midden was found near Rotary Beach Park.

Made up largely of shells, an assessment was completed with a First Nations review through and the province has now approved the work to continue, with monitoring required in the area during work.

“As agreed during the review, the city will ensure that if anything of significance is found, it is properly cared for and provided to the Campbell River Museum,” said Dave Morris, general manager of assets and operations.

For more information on the projects and what’s to come, click here.

Freeland on Floyd protests turning violent in the U.S.