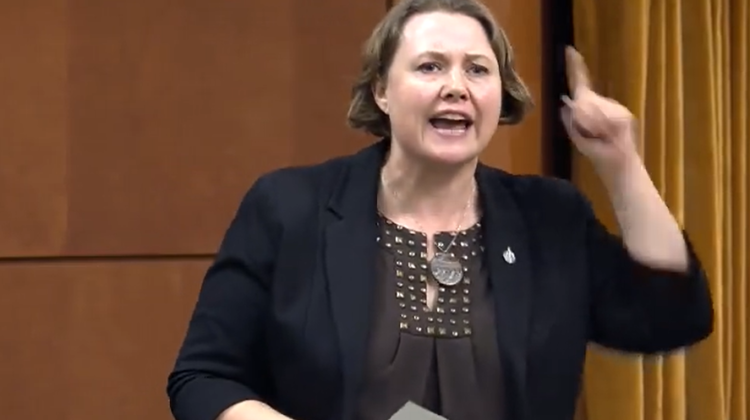 Blaney, who is the federal NDP Critic for Veterans, said veterans “are so far down this government’s list of priorities, they didn’t deserve mention” in a throne speech that was over an hour long.

During the Question Period this morning, Blaney pointed to the lack of attention given to veterans in the throne speech.

“Over 40,000 veterans in Canada are on a waitlist for benefits that they are owed,” Blaney said. “Some have waited months, some have waited well over a year. How many times were they mentioned in the speech from the throne? Zero.”

She called on the government to act now, to help veterans: “Can this government finally take some action quickly for these veterans. They stepped up for all of us as Canadians. When will this government step up for them?”

She said local veterans have reached out to her because they have applied for the CERB and hope they are eligible, because they “simply have nothing else.”

Blaney said that servicemen and women give so much for this country.

“They are there when we need them, whether it’s helping to keep our loved ones safe in long-term care homes during a pandemic or supporting our allies overseas,” Blaney added.

“Our veterans deserve much better from this government.”

Blaney says our veterans have been struggling to access support from Veterans Affairs Canada (VAC) who she believes is “chronically understaffed and underfunded.”

She added that vets often face considerable delays when trying to get their disability benefits, help with homelessness, or mental health services.

Blaney said that during the pandemic, many of the organizations that help veterans in the community had a hard time staying open “and received little or no support from the government to continue their important work filling gaps in services VAC can’t provide.”

“When Erin O’Toole was the Minister of Veterans Affairs under Stephen Harper, the Liberals joined New Democrats in opposing their deep cuts, but now that they have the opportunity to do more, they are ignoring veterans’ needs,” said Blaney. “Our veterans have been ignored and abandoned by the Harper Conservatives and now by the Liberals – it’s unacceptable. Our veterans stepped up to serve our country. We need the government to stand up for them.”

In response, Minister of Veterans Affairs press secretary, Cameron McNeill, said the well-being of our veterans and their families has been one of the government’s top priorities since 2015, “and it remains so.”

“We recognize that too many veterans are waiting too long for decisions on their applications, which is why we committed nearly $200m just a few months ago to hire hundreds of new staff and speed up processes to ensure they receive the benefits they’re entitled to in a timely manner,” he added.

“We also know that there are organizations providing valuable support to veterans and their families that are in need of financial assistance due to the pandemic, and $20m in emergency funding has been allocated through legislation tabled yesterday to support them.”

Shifting to the throne speech, McNeill said there are veterans experiencing homelessness “who need our support – ending chronic homelessness helps those veterans.”

“There are veterans who are unemployed – investing in training and creating one million jobs helps those veterans. There are a number of measures contained within the Speech from the Throne that will make a positive difference in the lives of veterans and their families across the country,” he added.

“And to be clear: after a decade of neglect by the previous government, we have invested more than $10B in our veterans and their families since 2016 on everything from funding for education, new Centres of Excellence on Chronic Pain and Post-Traumatic Stress Disorder, increased financial compensation for ill or injured veterans, and more.”

McNeill said defence minister Lawrence MacAulay has worked closely with MP Blaney on these and other issues in the past, “and looks forward to continuing to do so as we navigate the most challenging public health crisis in Canadian history.”