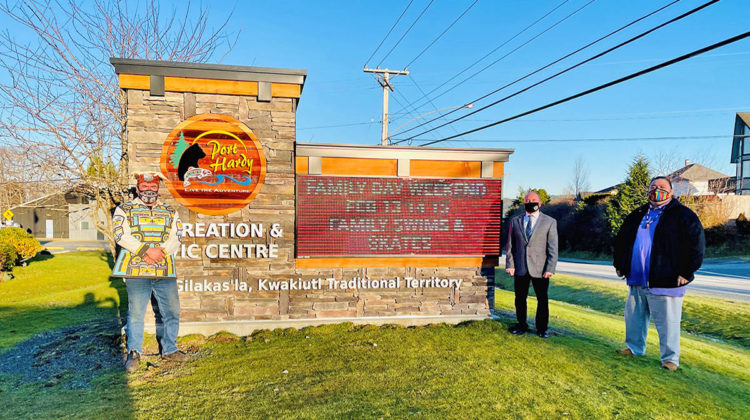 It was cause for celebration on North Vancouver Island.

The District of Port Hardy and the Kwakiutl First Nation signed a Relationship Agreement on the 170th anniversary of the Douglas Treaties.

This new agreement was signed at Municipal Hall on the traditional territory of the Kwakiutl earlier this month.

Hereditary Chief David Knox, Chief Councillor Ross Hunt Jr. and Mayor Dennis Dugas all took part in the signing with councillors and staff from each community watching the important achievement via Zoom.

Both Communities agree that their work together is intended to support and promote the wellbeing of the First Nation, the District, and the North Island as a whole.

Hereditary Chief David Knox said it was an important milestone to reach with the district.

“I am Honoured to be here and to have a dialogue with the District of Port Hardy and to be present with Ross and Dennis to talk about how we can all work together for the future for the whole of the North Island. The more we can work together, the more we network the better off we all are as one big community.”

Mayor Dennis Dugas shared his opinion on the agreement as well, saying it was one of the most important things he has been involved in.

“A big thank you goes to those who worked to get us here and how we all worked together to create an agreement that we can all work on together to strengthen our commitment to each other.”

“This is the traditional territory of the Kwakiutl people and we need to work together to make it better for us all. We thank everyone from both communities for the desire to work together for the North Island. I am excited about this Relationship Agreement and our commitment to continue to work together.”

If you would like to view the full Relationship Agreement, visit the District of Port Hardy’s website.