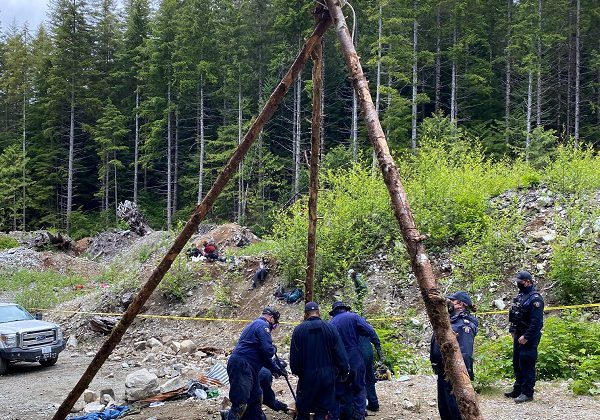 As the fourth week of enforcement draws to a close, the protesters preventing the construction of a forestry road into the Fairy Creek watershed near Port Renfrew are continuing their occupation.

Police say eight people were arrested on Thursday near Port Renfrew, for a total of 206 since enforcement of a BC Supreme Court injunction began on May 17th.

The protesters have been carrying out their blockades for 10-months now, beginning in mid-August of last year, after learning that Teal Cedar was building a road into the Fairy Creek Watershed.

The Rainforest Flying Squad is making it increasingly difficult to remove structures to make the work of RCMP officers time-consuming.

There have been protesters locked to gates, suspended on platforms hanging from trees, and in at least one instance, a cable attached to a vehicle on a bride holding a protester suspended over a river below.

The Rainforest Flying Squad says it plans to remain in the Fairy Creek area despite a pledge by the government to defer logging there for two years as three First Nations develop a forest stewardship plan.

Saul Arbess of the group called the announcement a “welcome change,” but says it’s not all that’s needed to pause logging in all critically endangered areas.

The Rainforest Flying Squad says it’s important for loggers to be kept away from old-growth forests adjacent to the Fairy Creek watershed.

Meanwhile, a Vancouver Island-based Orca support group is raising funds to “purchase the Preservation Rights” to the Fairy Creek watershed.

The Canadian Orca Rescue Society has launched an online fundraising campaign to get the money needed to purchase the valley.

The group works on behalf of salmon spawning grounds restoration and other initiatives that help Orcas.

It’s created the website buytherainforest.org to raise money for the purchase of the Fairy Creek watershed.