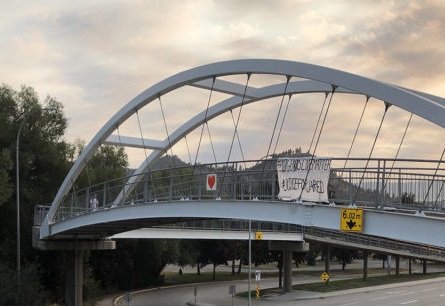 ‘#JusticeForJared’ and ‘#IndigenousLivesMatter’ was written on the banner hanging from a Kelowna overpass (Photo: Jacqueline Gullion)

The ‘Justice For Jared’ movement has made its way east, with a banner supporting Jared Lowndes spotted in Kelowna.

‘#JusticeForJared’ and ‘#IndigenousLivesMatter’ was written across the banner, draped from the Dayton Street pedestrian overpass.

The movement was triggered after Lowndes, of the Wet’suwet’en Nation’s Laksilyu (Small Frog) House, was killed in an officer-involved shooting in Campbell River on July 8th.

According to the National Police Foundation, Lowndes had an outstanding warrant for weapon offenses. After fleeing a traffic stop, he was cornered by the RCMP outside the Willow Point Tim Hortons.

The incident escalated; Lowndes fatally stabbed police dog Gator and injured a police officer. He was then shot dead by police. The Independent Investigations Office (IIO) of BC is now investigating the incident.

This past Tuesday, a crowd gathered in downtown Campbell River, holding a ceremony for 38-year-old Lowndes. They rallied out front of the RCMP detachment, before stopping by Lowndes’ memorial outside the Tim Hortons.

During the ceremony, Lowndes’ mother, Laura Holland, addressed the crowd: “My son is gone,” she cried. “I can’t see him, I can never see his face again. But he’s with me. I’ll take him with me in everything that I do, every breath that I take, I’ll bring my boy with me.”