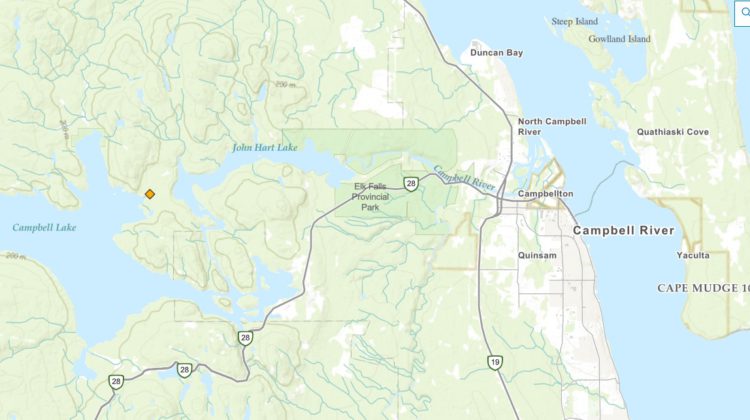 A wildfire west of Campbell River today — near Big Bay — is now under control, thanks to fire crews.

According to Bell, the fire was small, around 0.009 hectares in size. “No large concern there,” he tells My Campbell River Now.

However, Bell notes the cause of the fire is ‘undetermined’ at this time.

This comes as the Coastal Fire Centre — which covers Vancouver Island and the Sunshine Coast — sits on the ‘high’ to ‘extreme’ end of B.C.’s fire danger rating.

And while the number of wildfires burning within the region is low compared to other parts of B.C., officials are still asking locals to use ‘extreme caution’ when on Coastal With this in mind, B.C.’ers are being urged to not take any unnecessary risks in the backcountry.

READ MORE: Province calls for extra caution while in backcountry

To keep the wildfire risk down, the Province says BC Parks — in coordination with the BC Wildfire Service — has closed numerous parks to protect public safety, many of which are in the Kamloops Fire Centre, which is getting the brunt of the wildfire activity.

Officials in the Interior are asking vacationers to stay away, as wildfires continue to ravage the area.

There are currently more than 250 blazes now burning across B.C., and while that number is down, it hasn’t slowed flames burning in the hardest-hit regions. Forty of those fires are now considered ‘of note’ — meaning they’re either highly-visible, pose a threat, or both.

So far, 4,400 properties have been evacuated, with residents of another 17,000 ordered to be ready to leave at a moment’s notice.

Meantime, the Province is thanking recreationalists for reporting fires in the backcountry and elsewhere. You can report a wildfire by dialing *5555 on a cellphone or calling toll-free: 1 (800) 663-5555