DFO cracking down on fishing violators off Vancouver Island 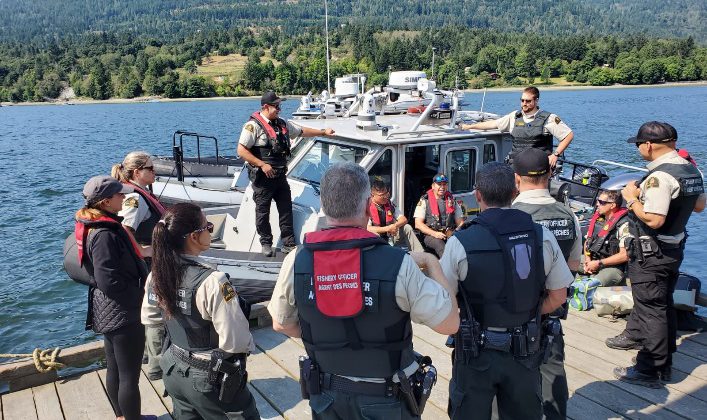 A recent ‘enforcement blitz’ just off Vancouver Island proved successful for the Department of Fisheries and Oceans (DFO).

On July 9th and 10th, fishery officers from the DFO’s Conservation and Protection branches in Powell River, Nanaimo, Duncan, Victoria, and Annacis Island worked together to conduct a blitz of B.C.’s Southern Gulf Islands.

A total of five vessels, one land-based platform, and a dedicated aircraft were called in to do the job, with the goal of enforcing provisions under the Fisheries Act and its regulations.

All told, officers checked 76 vessels and 187 anglers, finding a handful of violations, including: retention of wild coho, fishing inside RCA closures, over limits of crab and rockfish, using barbed hooks while salmon fishing, unmarked recreational prawn traps, and failing to produce fishing licenses.

While warnings have been issued for some of these violations, the DFO says officers will conduct investigations into more serious infractions. These could result in fines or court appearances.

During the blitz, it’s noted officers also assisted with two on-water emergencies, attended a Mayday distress call of a vessel taking on water, and helped an Air Ambulance with the evacuation of an injured person from a beach.