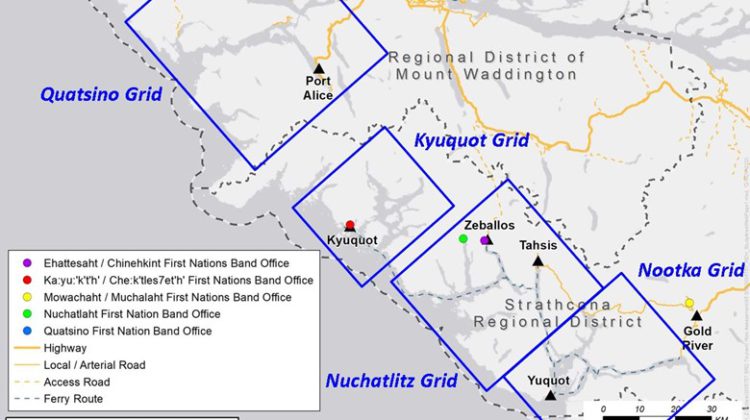 Four grids represented in the high-resolution overland tsunami mapping. Phase one of the project focused on the Kyuquot & Nuchatlitz grids and phase two will be Quatsino & Nootka grids (Photo supplied by: SRD)

Maps from phase one, including tsunami amplitude and velocity maps for the entire project area, plus overland tsunami inundation maps for 25 areas within the Kyuquot and Nuchatlitz grids, are now available online.

“These maps present the anticipated effects of a tsunami at high tide with an additional freeboard (safety factor) to capture the most probable worst-case scenarios from the Cascadia Subduction Zone and Alaska Aleutian Subduction Zone,” explains Strathcona Regional District Chair, Brad Unger.

He says the SRD’s next steps will be to host in-person public engagement sessions later this month in the Kyuquot and Nuchatlitz grids, “to discuss and educate the public about the impact of these maps on land use planning, conceptual mitigation options, and evacuation considerations.”

According to the SRD, phase one’s completion comes thanks to a collaborative endeavor with five First Nations, four municipalities, two Regional Districts, and several private and provincial stakeholders, made possible by a Flood Planning grant through the Union of BC Municipalities.

Next spring, phase two will begin under funding provided by a private donor and will include the design, purchase and installation of outdoor tsunami inundation map signs to educate the public about tsunami risk in their areas.

The second phase will also include the production of a short film, the development of an interactive, internet-based story map, the delivery of a “Waves of Knowledge” earthquake and tsunami science education module, and higher-resolution tsunami risk assessments for the Mt. Waddington Regional District and Gold River, the SRD adds.

To learn more about the Northwest ‘Vancouver Island Tsunami Mapping Project’ and to view phase one maps, visit this website.