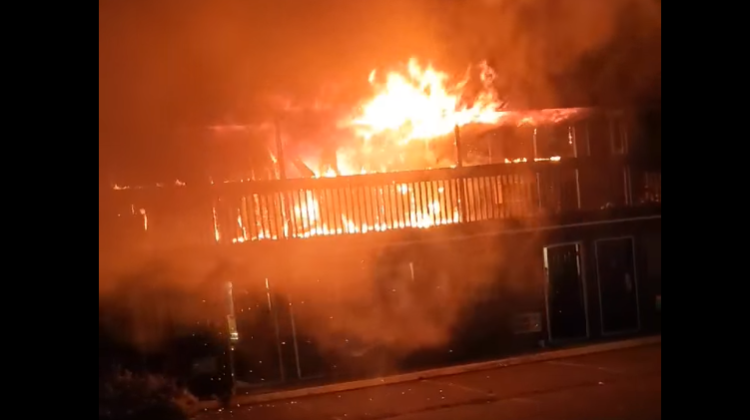 One man was sent to hospital after an overnight fire that destroyed part of the Courtenay Travelodge.

Courtenay fire crews were called to the motel, which is being used for supportive housing during the pandemic, just after 3:00am.

Fire chief Kurt MacDonald said when firefighters got there, they found heavy flames and smoke coming out of a second floor unit.

“Crews were able to quickly knock down the fire and then rescued a resident who had been trapped in a neighbouring unit,” MacDonald told Vista Radio.

“The resident was transported by BCAS (BC Ambulance Service) to the hospital with what was reported as non life threatening injuries. This was a fairly significant incident and required a lot of resources.”

Comox Fire Rescue, BC Hydro, RCMP, BC Ambulance Service, Comox Valley Regional Transit buses, and emergency support services were there to help out with the fire and to assist those who were displaced.

MacDonald says they have no idea how the fire started as of yet.

“Security is on scene protecting the evidence and we will be going down with the RCMP shortly to start the investigation,” he added this morning.

MacDonald says there were no other injuries.

He added that there are three buildings on the property and the other two weren’t damaged.

“There is heavy smoke, heavy fire, and water damage in that middle unit. How many of them will be able to be lived in, in the short term, I just don’t know.”