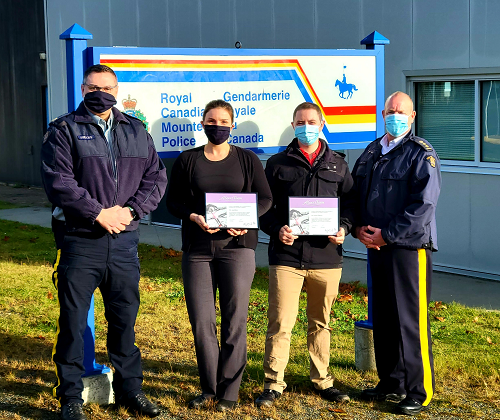 Police officers on North Vancouver Island are being recognized for their efforts in removing impaired drivers from local roads.

In Port Hardy, both Cst. Pearson and Cst. Miller were recently presented an ‘Alexa Award’ for stopping over 12 impaired drivers last year.

According to the BC RCMP, the Alexa’s Team program “recognizes dedicated police officers across British Columbia who diligently work to reduce the number of drivers affected by alcohol or drugs.”

It says the program was launched as a tribute to Alexa Middelaer, a 4-year-old killed by an impaired driver back in 2008 while feeding a horse with her aunt in Delta, B.C.

“To be considered for Alexa’s Team, an officer must remove a minimum of 12 drivers from the road by way of a 24-hour prohibition, Immediate Roadside Prohibition, Administrative Driving Prohibition, Drug Recognition Evaluation or Criminal Code investigation in one year,” the RCMP adds.