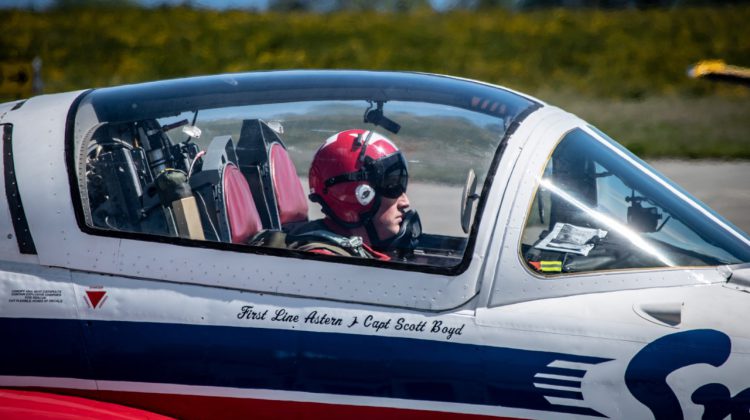 COMOX, B.C – Scott Boyd is enjoying his return to the Comox Valley.

The Canadian Armed Forces Snowbirds are back in the area for spring training, and so is Boyd, who began his flying career on Vancouver Island.

Captain Boyd flies Snowbird 4, and is originally from Burnaby on the Lower Mainland.

The MyComoxValleyNow.com newsroom caught up with him Tuesday afternoon following the Snowbirds practice, and asked about his journey back to the Valley.

“I was part of the Air Cadet program, so in 2006 I was lucky enough to come here (to Comox) with the Air Cadets to get my gliding licence.”

“The following summer I came back and I did my private pilot’s licence at the Courtenay Airpark, and the Qualicum Airport.”

He then taught gliding for one summer before heading to the Royal Military College in Ontario.

From there, he ended up at 443 Squadron in Victoria, and was there for a year before being sent to Moose Jaw to complete his training.

Moose Jaw is where he completed phase two and phase three of his pilot training, and earned his wings in December of 2013.

After completing phase four of training, he stayed in Moose Jaw and taught from 2015 to the summer of last year, when he joined the Snowbirds.

Boyd said becoming a Snowbird was his childhood dream.

“I was a little kid, probably five or six years old and I remember watching them at the Abbotsford airshow and thinking, man I want to do that when I grow old,” said Boyd.

“Pretty much been striving for this my entire life, it’s been a dream come true.”

He added that the entire Snowbird crew of technicians and pilots are some of the best people to work with.

“Everyone is so dedicated and so professional, and that’s kind of the greatest thing to be on this team.”

When asked what it’s like to be back in the Valley for training, he said he’s enjoying the friendly reception from people.

“The area has been great. Everyone is so happy and has been so great to us. Great hosts, and we love being here.”

He also was a fan of the weather.

“Moose Jaw got a bunch of snow yesterday, so it’s really nice to be here in the sunshine,” said Boyd.

The Snowbirds will be training in the Valley until May 7th.