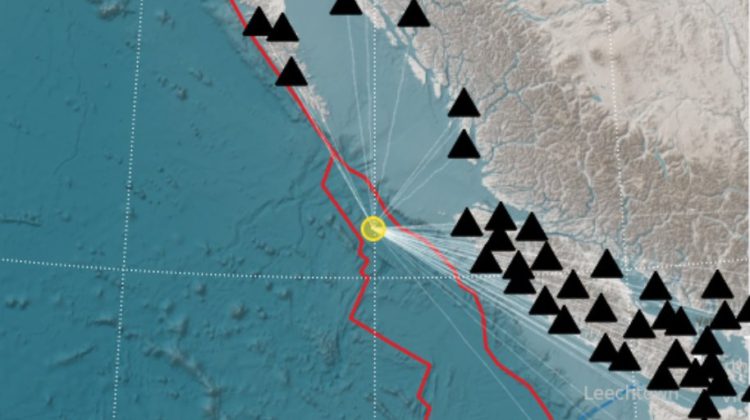 The most recent happened after midnight and had a magnitude of 4.3. Earlier, a quake measuring 4.0 hit the same area just after 10:30 last night (Jan. 13).

Both were located more than 150 kilometres west of Port Hardy at a depth of 10 kilometres, but they weren’t felt, and there were no reports of damage.

That’s because the surface or crust of the earth is constantly moving, with large segments of this crust, called tectonic plates, continually shifting against each other, causing stress to build up.

“When the stress becomes too great, a sudden rupture or earthquake occurs along a zone of weakness called a fault, generating seismic waves,” Natural Resources states.

“Earthquakes occur most frequently where tectonic plates interact – such as the Cascadia Subduction Zone of southwestern British Columbia,” it adds.

On Sunday, Jan. 2, Canada’s first earthquake of 2022 with a magnitude over 4.0 was recorded off the island, west of Port Alice. No impact or damage was reported, according to Natural Resources Canada.

M4 earthquake off the northwest tip of #VancouverIsland at 10:38 p.m. PT this evening.
Details: https://t.co/jY999TpR5e
Not an unusual event for this offshore region.
More on earthquakes in southwest BC: https://t.co/wlgp9sbQbN#NRCanSci pic.twitter.com/gip94UPbDD

A second offshore Vancouver Island #earthquake at 00:25 a.m. today. Slightly larger at M4.3 and in the same area as the event at 10:38 p.m.
Details:https://t.co/3MaiVD3RNW
See live ground shaking at Port Hardy (~180 km from the earthquakes) here:https://t.co/dKkOorXUdl pic.twitter.com/5eL7IKig0A